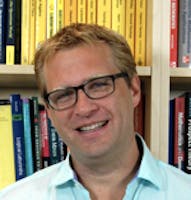 Eric Pacuit is an Assistant Professor in the Department of Philosophy at the University of Maryland, College Park. He has a masters degree in Mathematics from Case Western Reserve University and a PhD in computer science from the Graduate Center of the City University of New York. His primary research interests are in logic (especially modal logic), foundations of game theory, and social choice theory; he has secondary interests in (formal) epistemology and decision theory. Prior to coming to Maryland, he was a resident fellow at the Tilburg Institute for Logic and Philosophy of Science, a postdoctoral scholar at the Institute for Logic, Language and Information at the University of Amsterdam, and taught in the Philosophy and Computer Science departments at Stanford University. His work has been supported by a grant from the National Science Foundation and a VIDI grant from the Nederlandse Organisatie voor Wetenschappelijk Onderzoek (NWO: the Dutch Science Foundation).