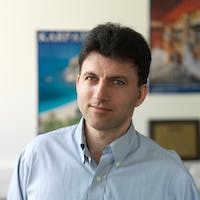 Professor Paragios is an IEEE Fellow, has co-edited three books, published more than two hundred papers in the most prestigious journals and conferences of medical imaging and computer vision (DBLP server), and holds twenty one US patents. Professor Paragios is the Editor in Chief of the Computer Vision and Image Understanding Journal and has served/serves as an associate/area editor/member of the editorial board for the IEEE Transactions on Pattern Analysis and Machine Intelligence (PAMI), the Computer Vision and Image Understanding Journal (CVIU), the International Journal of Computer Vision (IJCV), the Medical Image Analysis Journal (MedIA), the Journal of Mathematical Imaging and Vision (JMIV), the Imaging and Vision Computing Journal (IVC), the Machine Vision and Applications (MVA) Journal and the SIAM Journal in Imaging Sciences (SIIMS) while he was one of the program chairs of the 11th European Conference in Computer Vision (ECCV'10, Heraklion, Crete) and serves regularly at the conference boards of the most prestigious events of his fields (ICCV, CVPR, ECCV, MICCAI).