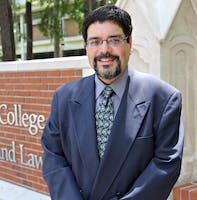 Pedro A. Malavet is a Professor and Director of the LLM in Comparative Law Program at the University of Florida Fredric G. Levin College of Law. He has been a member of the College’s faculty since 1995. Malavet earned his B.B.A. in Accounting at Emory University in 1984; his J.D., magna cum laude, at Georgetown University Law Center in 1987; his L.L.M. as the Future Law Professor Fellow at Georgetown University Law Center in 1994 and 1995. Malavet teaches Evidence, Comparative Law and Introduction to the Legal System of the United States. He is a member of the American Law Institute (elected September 2009); Director of UF Levin College of Law Sponsor Membership in the American Society of Comparative Law (since July 2010); presides the University of Florida Chapter of the Order of the Coif; and has served on the Association of American Law Schools: Membership Review Committee (2007-2009). His prior work experience includes being a Junior Partner, working on civil and criminal litigation, at Bufete Malavet & Ayoroa in Ponce, Puerto Rico; Adjunct Professor of Law at Georgetown and at the Pontifical Catholic University of Puerto Rico; and law clerk to the Honorable Raymond L. Acosta of the United States District Court for the District of Puerto Rico.