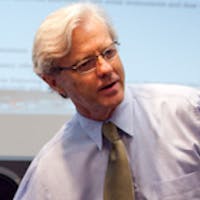 Steve Everett is Dean of the College of Architecture, Design, and the Arts and Professor of Music at the University of Illinois at Chicago. From 1991-2013, he was Professor of Music and Assistant Vice Provost for Faculty Affairs at Emory University where he taught composition and computer music, founded and directed MARCE - the Music-Audio Research Center at Emory, and founded and directed the Emory Javanese Gamelan Ensemble.

He was also artistic director and conductor of Thamyris New Music Ensemble in Atlanta. He has been a visiting professor of composition at Princeton University, Eastman School of Music, Conservatoire National Supérieur de Musique de Paris, the Conservatoire de Musique de Genève in Switzerland, Codarts Rotterdam Conservatory of Music, HKU University of the Arts Utrecht, and Tokyo Denki University.

He has received composition awards from the Rockefeller Foundation, Asian Cultural Council, Chamber Music America, American Composers Forum, Center of Chemical Evolution at Georgia Tech, and International Trumpet Guild. Many of his compositions involve performers with computer-controlled electronics and have been performed in over twenty-seven countries, including at IRCAM and INA-GRM Radio France in Paris, Orgelpark in Amsterdam, The Esplanade in Singapore, Seoul Computer Music Festival, as well as Lincoln Center and Carnegie Hall in New York.