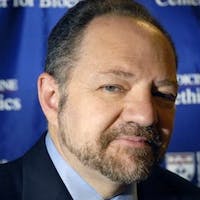 Jonathan D. Moreno, Ph.D. is the David and Lyn Silfen University Professor of Ethics at the University of Pennsylvania, where he is also Professor of Medical Ethics and Health Policy, of History and Sociology of Science, and of Philosophy. Moreno is a Senior Fellow at the Center for American Progress in Washington, DC, where he edits the magazine Science Progress(www.scienceprogress.org). His most recent book, The Body Politic: The Battle Over Science in America, was named a “Best Book” of 2011 by Kirkus Reviews. He is also the author of Mind Wars: Brain Research and the Military in the 21st Century. The American Journal of Bioethics has called him “the most interesting bioethicist of our time.”

Moreno is an elected member of the Institute of Medicine of the National Academy of Sciences and is a National Associate of the National Research Council. He has served as a member of President Barack Obama’s transition team, has been a senior staff member for three presidential advisory commissions and has given invited testimony for both houses of congress. Nominated by the U.S. government, Moreno is a member of the UNESCO International Bioethics Commission. He was an Andrew W. Mellon post-doctoral fellow, holds an honorary doctorate from Hofstra University, and is a recipient of the Benjamin Rush Medal from the College of William and Mary Law School and the Dr. Jean Mayer Award for Global Citizenship from Tufts University. Moreno is a frequent contributor to the Huffington Post, Psychology Today, and other major media.

Moreno has served as an adviser to many non-governmental organizations, including the Howard Hughes Medical Institute and the Bill and Melinda Gates Foundation Bioethics Advisory Board for Grand Challenges in Global Health Initiative, Beijing, China. He is a member of the Governing Board of the International Neuroethics Society, and is a Faculty Affiliate of the Kennedy Institute of Ethics at Georgetown University, a Fellow of the Hastings Center, and a past president of the American Society for Bioethics and Humanities. He advises various science, health, and national security agencies.