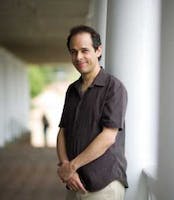 David Germano has taught and researched Tibetan and Buddhist Studies at the University of Virginia since 1992. UVa's Tibetan Studies programs is the largest in the Americas, while the Buddhist Studies program is one of the largest in the West. In 2000, he founded the Tibetan and Himalayan Library (www.thlib.org), which has become the world's largest digital initiative building collaborative knowledge on the region. He is the founding director of the Tibet Center (www.uvatibetcenter.org) in the College of Arts and Sciences, which is home to the largest series of academic exchange programs Tibetan areas, as well as the most extensive set of academic operations in the region. This includes four offices in China and Bhutan, and seventeen full-time staff on site.

More recently, Germano acted as the founding director of SHANTI (Sciences, Humanities and the Arts Network of Technological Initiatives, www.uvashanti.org), an initiative aimed at the mainstreaming of cutting edge digital technology for faculty, students, and staff across the University. Since 2011, Germano has played the central role in preparing and then organizing UVa’s new Contemplative Sciences Center (www.uvacontemplation.org), which he currently directs. He works extensively with each of the eleven schools at UVa to explore learning, research, and engagement initiatives regarding contemplation in their own disciplinary and professional areas, as well as new partnerships across the schools.

Germano's personal research focuses on the history of Tibetan with a special focus on contemplative and philosophical traditions. He has lived for many years in Tibetan communities in China, in the context of which he has also worked extensively on programs of scholarly engagement, community service, participatory knowledge, and digital technology initiatives. He is currently focused on the exploration of contemplative ideas, values, and practices involving scientific methodologies and new applications in diverse fields.