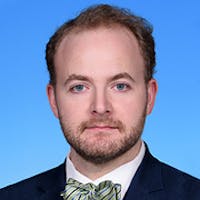 Dr. Isaac Droscha, operatic baritone, holds a Doctorate in Vocal Performance from the University of Michigan and is currently a lecturer of humanities at The Hong Kong University of Science and Technology. Isaac is also the co-conductor of the HKUST University Choir and is the music director and vocal coach of the HKUST summer musical, which he also helps coordinate. He is all the Residential Life Creative Arts Fellow and Manger of the SHSS office of Arts and Events. Isaac has performed a number of roles with various companies in the United States, including the Des Moines Metro Opera (young artist), Michigan Opera Theater, Opera New Jersey (young artist), the Bayview Music Festival, and Arbor Opera Theater, for which he is currently serving as a board member. His performances have received numerous positive reviews, including: “Isaac Droscha is ingenious in his portraying of Falstaff;” and “Isaac Droscha, in the same role, was blessed with an extremely robust and agile voice, and behaved onstage like a true commedia dell’arte clown, throwing in countless little comic asides that landed perfectly every time;” and “Isaac Droscha, who combined his lovely voice with a very well-acted menacing presence. Droscha really hit his stride when revealing his character's true identity near the end of the opera in a riveting performance.” Other major roles performed include the title roles in Rossini’s Il barbiere di Siviglia and Mozart’s Le Nozze di Figaro, the Musik Lehrer in Stauss’ Ariadne auf Naxos, Nick Shadow in Stravinsky’s The Rake’s Progress, Escamillio in La Tragédie de Carmen, Dancaire in Carmen, and Dr. Falke in Strauss’ Die Fledermaus, and Dulcamara in L’elisir d’amore. He is also a prolific concert performer of oratorio and art song and has performed roles in Handel’s Messiah, Faure’s Requiem, Mozart’s Requiem, and Haydn’s The Creation. He has sung as a soloist with the Great Lakes Chamber Orchestra, the Ann Arbor Symphonette, The Pro Arte Orchestra of Hong Kong, and was featured as a guest artist at the 2017 Intimacy of Creativity Festival of Contemporary Song in Hong Kong. In Hong Kong he is frequent collaborator with Musicviva Hong Kong, performing in operas and song recitals through the year. As an academic, he has received fellowships and Scholarships from the University of Northern Iowa and the University of Michigan for Study and at Hope College was awarded the first Sakiko Kanamori Prize and the Grace Marguerite Browning Scholarship for voice. He graduated from Hope in 2008. Isaac has performed numerous recitals in the United States, Russia, and Hong Kong, including performances at the Estates Theater in Prague, CZ and at the Rimsky-Korsakov Museum in St. Petersburg Russia.