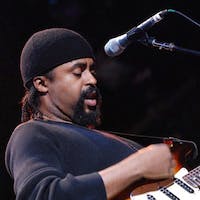 Thaddeus Hogarth is an associate professor in the Guitar department at Berklee College of Music. A two-time winner of the Independent Music Award for R&B/Blues, Thaddeus has been a prominent guitar player and singer-songwriter on the music scene since 1988, when he graduated from Berklee. He leads his own group, the Thaddeus Hogarth Band, featuring David Buda on bass, Joey Scrima on drums, and David Sparr on keyboards. Thaddeus has shared the bill or stage with such legends as Tower of Power, Average White Band, Ernie Isley, James Montgomery, Fred Wesley, Eric Gales, and Johnny Winter. His work also includes collaboration with the reggae legend and Grammy nominee, Sister Carol. He has released four solo CDs, a live concert DVD, and an instructional book. Thaddeus authored and currently teaches the course Funk/Rock and R&B Guitar Soloing for, the online continuing education division of Berklee College of Music, Berklee Online.