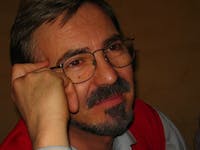 Professor of Physics, Physics Department, Sapienza Università di Roma. He graduated at la Sapienza, realizing a superconducting magnetometer (SQUID) for the magnetic analysis of Hemoglobin. He then joins the group created in Roma by Edoardo Amaldi for the experimental search of Gravity Waves, developing the superconducting detecting system used by the Explorer GWA at CERN. In 1980, the year of Reagan in USA and Ustica in Italy, he is at the University of Maryland (Washington DC) as associate researcher in the Joe Weber group. Coming back in Italy, he becomes Researcher; in 1986 he is Associate Professor in Salerno, and then is called by the Engineering Faculty of la Sapienza to teach in the laboratory class of Electronic Engineering. During these years he sets the detection system, the three-mode superconducting transducer coupled to a dc SQUID for the Nautilus Gravitational Wave Antenna, first in Geneva at CERN and then in Frascati-INFN. He create a small group at the Rome Physics Department to investigate on quantum effects appearing on macroscopic systems, namely superconducting devices cooled below 100 mK. He makes measurements in stationary regimes of the quantized energy levels of a Josephson Junction and of an rf-SQUID cooled below 50mK. He then moves to experimental Quantum Computation, presenting a project of INFN, Italy for the implementation of a qubit realized with superconducting devices. He makes measurements on a dc SQUID based qubit measuring for the first time the coherent oscillations induced by microwave pulses. In addiction he start a collaboration with the CUORE (Cryogenic Underground Observatory for Rare Events) experiment, situated in the Gran Sasso laboratories, for the search of neutrinoless double beta decay, and with CALDER (Cryogenic wide-Area Light Detectors with Excellent Resolution) . In the last years he has been the PI of a project on the ethics and optimisation of Science Communication, and responsible for the Science, Engineering and Statistics Faculties of Sapienza, on the high school student counselling for the best choice of the university curricula. He collaborate with National Italian TV programs (Geo&Geo) for homemade physics experiments. At present he teaches at Sapienza Università di Roma: class of “Electricity and Magnetism”, for Engineering students, “Physics principles” for Philosophy students, and “Science & Theatre Laboratory” for Science and Performing Arts students.

He plays in Die Physiker by Dürrenmatt, in Life of Galileo and Antigone by B. Brecht, and in small fragments from Alan Turing’s apple by V. Patera, The Hitchhiker's Guide to the Galaxy by D. Adams, and The last question by I. Asimov. All these works are played at the University or in historic sites (Il Chiostro di San Pietro in Vincoli, Il Collegio Romano, I Mercati Traianei…).