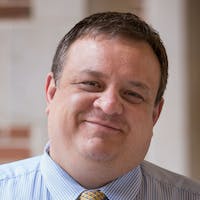 Among his many accomplishments, Dragomir Radev was cited for being aninternational leader in computational linguistics, and contributingsignificantly to automatic methods to extract content from text,including data mining, Web graph and network analysis, andbioinformatics. Using natural language processing, informationretrieval, and machine learning, he makes sense of the explodingvolume of digital content.Professor Radev was the first to develop ways to generate informativesummaries from multiple online sources, addressing for the first timethis important problem. Before joining the University of Michiganfaculty in 2000, he worked at IBM’s T.J. Watson Research Center. AtIBM, he co-authored three patents, one of which was for a forerunner tothe Watson Q&A Engine.Professor Radev is one of the co-founders of the North AmericanComputational Linguistics Olympiad (NACLO), which began in 2006. Thisevent for high school and middle school students from the U.S. andCanada introduces the field of computational linguistics throughcompetitions to solve linguistic puzzles using analyticreasoning. Each year, he has coached and traveled with theU.S. national teams who participate in the International LinguisticsOlympiad and has returned with several gold medals. In 2011, Radev andhis fellow organizers received the Linguistics, Language and thePublic Award from the Linguistic Society of America.Radev is Professor of Electrical Engineering and Computer Science (in theCollege of Engineering), Professor of Information (in the School of Information), and Professor of Linguistics (in the Collegeof Literature, Science and the Arts).Dragomir Radev is an ACM Fellow (2015) and he won the University of Michigan Faculty Recognition Award.