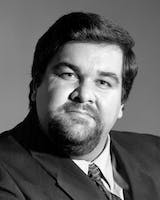 Dr. Roberto Mancusi is an Associate Professor of Music at the University of Tennessee at Martin, where he has taught since 2008. Prior to his arrival in Tennessee, he was an assistant professor at Eastern New Mexico University (Portales, New Mexico) and an adjunct professor at Avila College (Kansas City, Missouri), Baker University (Baldwin City, Kansas), and Graceland College (Lamoni, Iowa).

As a singer, Dr. Mancusi has performed across the country and in England. He has performed in over 20 different operas and musicals ranging from Sarastro (Die Zauberflote) and Falstaff (Falstaff) to Prologus/Pseudolus (A Funny Thing Happened on the Way to the Forum). On the concert stage, Dr. Mancusi has been heard as the bass soloist in such works as Beethoven's Missa Solemnis and Symphony No. 9, Faure's Requiem, Handel's Messiah, Haydn's Creation, and Mendelssohn's Elijah, among others. Most recently, Dr. Mancusi made his international debut in concert at London's prestigious St. Martin-in-the-Fields church.

Dr. Mancusi is, also, an accomplished clinician, adjudicator and author. He has given numerous master classes for singers of all levels, throughout the Midwest, South and Southwest. He has served as an adjudicator for district and regional auditions of the National Association of Teachers of Singing and New Mexico All-State auditions, as well as a number of local and regional talent competitions. As an author, Dr. Mancusi's first textbook, Voice for Non-Majors, was published in 2008 by Pearson/Prentice Hall and is in use around the world.