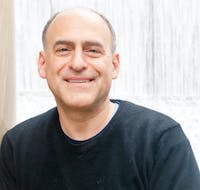 Stephan Koplowitz is an award winning director/choreographer/media artist known for his work on stage, film and site. His site work aims to alter people’s perspectives of place, site, and scale, all infused with a sense of the human condition and is concerned with the intersection of natural, social and cultural ecologies within urban and natural environments. Since 1984 he has created 64 works and has been awarded 44 commissions. He is the recipient of a 2004 Herb Alpert Award in the Arts (Dance), a 2003 Guggenheim Fellowship in Choreography in addition to a 2000 New York Dance and Performance Award, “Bessie” for “Sustained Achievement” in Choreography. Koplowitz is also the recipient of six National Endowment for the Arts Choreography Fellowships from (1988-97). His choreography and company, Stephan Koplowitz & Company (Kop Art, Inc.) have been produced repeatedly by internationally recognized performing arts venues domestically and abroad . Some recent highlights: In Los Angeles on the Red Line of LA Metro (2013), the Milwaukee Art Museum as part of Summer Dances at the University of Wisconsin, Milwaukee (2013): in Houston (the Water Wall, 2012, named the best ensemble performance in 2013), Boston’s Institute for Contemporary Art (ICA, 2007), Mass MoCA, and the Center for New Media in Salt Lake City (2013). Abroad his work was performed at the Spoleto Open Festival, Spoleto, Italy, 2012, Plymouth, England, Dartington (2009), L’Espace, Centre Culturelle in Hanoi, Vietnam (2005) the Kokerei Zollverein Factory (1999, Essen Germany), at the British Library (1998) and at London’s Natural History Museum (1996) both commissioned by the Dance Umbrella Festival.

On September 20, 2014, he will premiere a commissioned site-specific performance event for the re-opening of Ohio State University’s Sullivant Hall and will be at the 2014 Bates Dance Festival creating a series of site based films inspired by the history, ecology and architecture of the Lewiston-Auburn area.

After living in New York City for 23 years, Koplowitz, in 2006, was appointed dean of The Sharon Disney Lund School of Dance at the California Institute of the Arts (CalArts, Los Angeles) where he currently resides. In addition to his role as dean, Koplowitz is on faculty and teaches advanced choreography and MFA seminar classes. He is a contributor to the first book on site-specific choreography, Site Dance, published by Florida University Press. For more information on his work and to see some specific examples of work mentioned above visit www.youtube.com/user/lanycart & www.koplowitzprojects.com