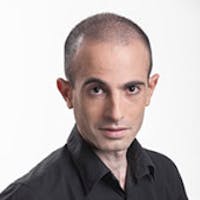 Dr. Yuval Noah Harari lectures at the Department of History, the Hebrew University of Jerusalem. He specializes in World History, medieval history and military history. For the past decade he has been teaching an introductory course in World History to various groups of students at the Hebrew University, including Israelis, Palestinians and foreign exchange students; Jews, Christians, Muslims and atheists. His teaching philosophy is focused on provoking the students to question the basic narratives of our world, to connect past developments with present concerns, and not to be afraid of controversial issues. His most recent book, From Animals into Gods: A Brief History of Humankind (2012) was originally published in Hebrew. After becoming a national bestseller in Israel, it is has now been translated into different languages including English and German. His current studies focus on the connection between history and biology, on the ethics of history, and on the history of happiness and suffering. His many other publications include Special Operations in the Age of Chivalry, 1100-1550 (2007); The Ultimate Experience: Battlefield Revelations and the Making of Modern War Culture, 1450-2000 (2008); “The Concept of ‘Decisive Battles’ in World History”, The Journal of World History 18:3 (2007), 251-266; and “Armchairs, Coffee and Authority: Eye-witnesses and Flesh-witnesses Speak about War, 1100-2000”, The Journal of Military History 74:1 (January 2010), pp. 53-78.