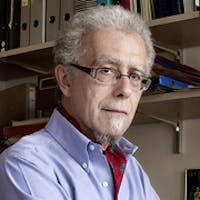 Dominique Belin studied chemistry and biology in Geneva. He joined the Department of molecular biology as a graduate student and obtained a PhD under the direction of Richard H. Epstein who discovered the amber mutants of bacteriophage T4. His thesis work dealt with the unexpected discovery of a temperature sensitive mutant in the non-essential N-terminal region of the rIIB gene of phage T4. The mutation turned out to change the initiation codon from AUG to AUA. During a post-doctoral stay at Rockefeller University, he worked mainly on plasminogen activators, serine proteases that allow the dissolution of fibrin clots. Upon his return in Geneva, this time in the Medical School, he worked together with Jean-Dominique Vassalli on developments of the fibrinolytic cascade that included a cellular receptor and several protease inhibitors that belong to the SERPIN superfamily. The anomalous behavior of PAI-2, one of these inhibitors, that is recovered from both cell lysates and cell supernatant led to many studies on signal sequences and protein translocation across membranes. Thus, and contrary to the prevailing view, a single polypeptide chain is not necessarily targeted with full efficiency to the cytoplasm or the lumen of the endoplasmic reticulum, a space topologically identical to the extracellular one. This prompted him to start again to work on microbial systems, first with Jon Beckwith, at the Harvard Medical School, and then in Geneva. The observation that an intrinsically inefficient signal sequence can nevertheless interfere with protein translocation and lead to a conditional-lethal phenotype led to isolation of many suppressors in most genes encoding the main components of the SecYEG translocation machine. Most of the effort was directed toward understanding the role of SecG, the only unessential component of the machine. The different requirements for SecG with wild type and mutant or foreign signal sequences suggest that SecG, although non-essential under laboratory conditions, may have been retained during evolution in part because it could facilitate horizontal gene transfer and the proper targeting of newly acquired membrane proteins. The complete sequencing of the phage T4 genome provided an astonishing surprise. While this virus was the first organism in which all essential genes had been identified genetically in the 1960’s, its sequence has the capacity to encode twice as many proteins. Their function is unclear and more difficult to identify since most bear no significant homology with the proteins encoded by cellular genomes. Several of these genes encode proteins that interfere with growth and can be studied genetically.