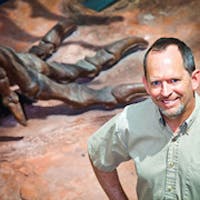 Anthony (Tony) Martin was born in Terre Haute, Indiana. Following up on an early affinity to natural history, he combined interests in biology and geology to earn a B.S. degree in geobiology from St. Joseph’s College (Indiana), an M.S. in geology from Miami University (Ohio), and a Ph.D. in geology from the University of Georgia. Although trained mostly as a geologist and paleontologist, his research emphasis is in ichnology, the study of modern and fossil traces. During his time at Emory University, Martin has taught a wide variety of undergraduate classes in geology and ecology, including field courses in the southeastern and western U.S., the Bahamas, and Australia. In his research, Martin’s fossil discoveries or co-discoveries include the only known burrowing dinosaur, the oldest dinosaur burrows in the geologic record, the oldest fossil crayfish in the Southern Hemisphere, the oldest bird tracks in Australia, and the best assemblage of polar dinosaur tracks in the Southern Hemisphere. Martin is the author of two editions of a popular college textbook, Introduction to the Study of Dinosaurs (Wiley-Blackwell), along with Life Traces of the Georgia Coast (Indiana University Press), Dinosaurs Without Bones, The Evolution Underground (both with Pegasus Books), and his latest book, Tracking the Golden Isles (University of Georgia Press). Martin also does outreach on ichnology and paleontology through public speaking and his author website (https://ajmartinauthor.com), and he is active on Twitter as @Ichnologist. In 2015, in recognition of his significant contributions to research, teaching, and public service, he was elected as a Fellow in The Explorers Club and a Fellow in the Geological Society of America.