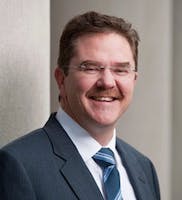 Robert Clark earned his doctorate in mechanical engineering from the Virginia Polytechnic Institute and State University in Blacksburg, Va., and joined Duke University’s Department of Mechanical Engineering and Materials Science in 1992. During Clark’s 16 years of service at Duke, he contributed to the institutions mission in numerous capacities. Clark founded Duke’s Center for Biologically Inspired Materials and Material Systems, where, with modest seed funding, he established a multimillion dollar program involving more than two dozen faculty members. He also held the Thomas Lord Professorship of Engineering and served as Dean of the Pratt School of Engineering before joining the faculty at the University of Rochester. Clark is completing his fifth year as dean of the University of Rochester’s Hajim School of Engineering and Applied Sciences. Clark is an expert in the science of acoustics, dynamic systems, applied control and bio-nano-manufacturing. His work in these areas has led to 140 journal publications and earned him awards including the Lindsey Award of the Acoustical Society of America, the National Science Foundation Career Program Award, the Presidential Early Career Award for Scientists and Engineers, and the NASA Group Achievement Award. He is a fellow of the American Society of Mechanical Engineers, the Acoustical Society of America, and the American Association for the Advancement of Science.