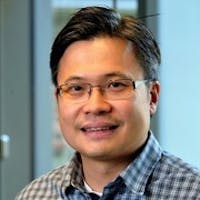 Boon Thau Loo is the RCA Professor in the Computer and Information Science (CIS) department at the University of Pennsylvania. He holds a secondary appointment in the Electrical and Systems Engineering (ESE) department. He is also the Associate Dean of the Master’s and Professional Programs, where he oversees all masters programs at the School of Engineering and Applied Science. He leads the NetDB@Penn research team, and is also currently the director of the Distributed Systems Laboratory (DSL), an inter-disciplinary systems research lab bringing together researchers in networking, distributed systems, and security. He received his Ph.D. degree in Computer Science from the University of California at Berkeley in 2006. Prior to his Ph.D., he received his M.S. degree from Stanford University in 2000, and his B.S. degree with highest honors from University of California-Berkeley in 1999. His research focuses on distributed data management systems, Internet-scale query processing, and the application of data-centric techniques and formal methods to the design, analysis and implementation of networked systems. He was awarded the 2006 David J. Sakrison Memorial Prize for the most outstanding dissertation research in the Department of EECS at University of California-Berkeley, and the 2007 ACM SIGMOD Dissertation Award. He is a recipient of the NSF CAREER award (2009), the Air Force Office of Scientific Research (AFOSR) Young Investigator Award (2012) and Penn’s Emerging Inventor of the year award (2018). He has published 100+ peer reviewed publications and has supervised twelve Ph.D. dissertations. His graduated Ph.D. students include two tenured professors, three tenure-track professors, and four winners of dissertation awards. In addition to his academic work, he actively participates in entrepreneurial activities involving technology transfer. He is the Chief Scientist at Termaxia, a software-defined storage startup based in Philadelphia that he co-founded in 2015. Termaxia offers low-power high-performance software-defined storage solutions targeting the exabyte-scale storage market, with customers in the US, China, and Southeast Asia. Prior to Termaxia, he co-founded Gencore Systems (Netsil) in 2014, a cloud performance analytics company that spun out of his research team at Penn, commercializing his research on the Scalanytics declarative analytics platform. The company was successfully acquired by Nutanix Inc in 2018. He has also published several papers with industry partners (e.g AT&T, HP Labs, Intel, Microsoft, Perspecta Labs, Raytheon BBN) applying research on real-world systems that result in actual production deployment and patents.