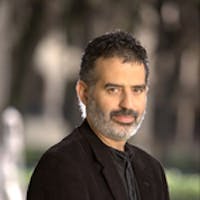 Enrique Tamés is a philosopher and holds a Ph.D. in Innovation and Educational Technology. He is currently Vice Rector of Universidad Tecmilenio, part of Tecnológico de Monterrey.

His research and publications are focused on the impact of new technologies on society, especially in the Latin American continent. Further, for much of his career as a professor and researcher, he has been committed to the study of contemporary art, aesthetics, and Latin American culture.

At the Tecnológico de Monterrey, Mexico City Metropolitan Area Rectory, he led the Mobile Learning project where teachers and students use Mobile Technology (smart phones, tablets, iPods and iPads) for enhancing the teaching-learning process. He was the Executive Director of the Mati-Tec project, a research project dedicated to providing mobile learning resources to public primary schools in order to help children learn.

Dr. Tamés complements his research and administrative responsibilities by teaching courses related to Educational Technology and Innovation, Contemporary Art and Society, and Advanced Topics in Humanistic Studies, at both, undergraduate and graduate levels.

As part of his hobbies, he dabbles with photography and has had the opportunity to show his work in Mexico and in Uruguay.