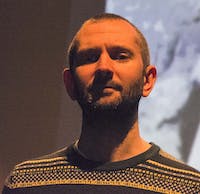 During my tenure as a Chancellor's Fellow, I am exploring the relationships between cinema and boredom. This project emerges from a long-running interest in the cinema of Andy Warhol: I have recently completed co-editing a collection of essays on Warhol's movies for the British Film Institute.

My interests in cinema and boredom are wide-ranging. I am currently exploring the adoption of boredom as an aesthetic strategy by a variety of video artists, experimental filmmakers, and directors associated with 'art cinema', including those discussed in relation to the so-called 'slow cinema' movement. I am examining topics related to film and boredom, including stillness and endurance. I'm also interested in the place of boredom within cinema as an economic system: do focus groups, for instance, contribute to the elimination of boredom from the regular filmgoing experience? The development of this research project can be followed here.