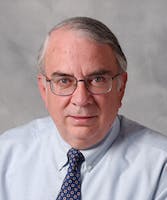 Anderson D. Smith is a Regents’ Professor Emeritus in the School of Psychology and director of the Psychology Memory Laboratory. His research is focused on adult age differences in memory. Until 2012, Smith was also Senior Vice Provost of Academic Affairs. Smith has won the Georgia Tech Outstanding Teacher Award and the institute's Sustained Research Award. He has also received national awards from the American Psychological Association (APA), including the Adult Development and Aging Outstanding Contribution Award and the 2011 APA Award for the Advancement of Psychology and Aging. Smith has served as editor of the scientific Journal of Gerontology, and was appointed to the National Advisory Council on Aging.