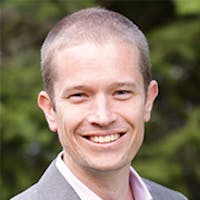 Jake VanderPlas is currently the Director of Open Software and was formerly the Director of Research in Physical Sciences for the eScience institute, and comes from a background of machine learning and data-intensive astronomy and astrophysics. Jake received his BS in Physics from Calvin College in 2003, and his PhD in Astronomy from the University of Washington in 2012. His PhD research, advised by Andrew Connolly, focused on the computational aspects of weak gravitational lensing, a technique in which small gravitational perturbations of light paths are utilized to learn about the distribution of matter in the universe. After his PhD, he received an NSF prize fellowship to work with Magdalena Balazinska in the University of Washington Database Research Group, where he focused on astronomical applications of the SciDB database system. Along with his astronomy and computing research, Jake is interested in encouraging open and reproducible research practices across scientific disciplines. To this end, he has been very active in the world of open source Python. He is a core maintainer or regular contributor to several well-known Python projects, including Scikit-learn, Scipy, Matplotlib, and IPython. He has authored several packages focused on promoting open and reproducible science, including astroML, scidbpy, mpld3, and others. He has been involved on the program and review committees for a number of well-known Python conferences, including the PyCon, SciPy, and PyData series. He is a co-author of the Python-powered text Statistics, Data Mining, and Machine Learning in Astronomy, and has presented many tutorials on the subject. He occasionally blogs about Python, Machine Learning, Visualization, and related topics at http://jakevdp.github.io.