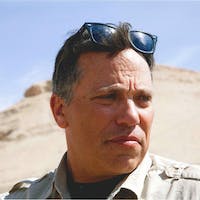 Senior Curator of Ancient Egyptian, Nubian, and Near Eastern Art

Recent special exhibitions curated by Dr. Lacovara at the Michael C. Carlos Museum, include: Life and Death in the Old Kingdom; Wonderful Things: The Harry Burton Photographs and the Discovery of Tutankhamun’s Tomb; Lost Kingdoms of the Nile: Nubian Treasures from the Museum of Fine Arts Boston,; Excavating Egypt: Great Discoveries from the Petrie Museum of Egyptian Archaeology, University College, London (That’s was at the Albany Institute); The Collector's Eye: Masterpieces of Egyptian Art from the Thalassic Collection, Ltd.; Treasures from the Royal Tombs of Ur; Jewish Life in Ancient Egypt: A Family Archive from the Nile Valley; and Ramesses I: The Search for the Lost Pharaoh.

He has been The Simpson Visiting Professor of Egyptology at the American University in Cairo and has also taught at Syracuse University, the University of Albany and the Massachusetts Institute of Technology.

Peter Lacovara formerly served as assistant curator in the Department of Ancient Egyptian, Nubian and Near Eastern Art at the Museum of Fine Arts, Boston, and was appointed curator of ancient art at the Michael C. Carlos Museum in 1998. As a graduate student, he also was a research assistant at the Field Museum of Natural History and the acting registrar at the Oriental Institute Museum at the University of Chicago.

His fieldwork has included excavations at the Valley of the Kings at Thebes, Deir el-Ballas, Abydos, Hierakonpolis and at the Giza Plateau, and currently is co-directing the excavation of the Palace city of Amenhotep III at Malqata in Western Thebes with the Metropolitan Museum of Art.

His publications are extensive and include The New Kingdom Royal City (1997); “Preliminary Report on the Expedition to Deir el-Ballas, 1980-1986”; Mummies and Magic: The Funerary Arts of Ancient Egypt (1988); The Realm of Osiris: Mummies, Coffins, and Ancient Egyptian Funerary Art in the Michael C. Carlos Museum (2001); Pyramids, Tombs and Temples at Giza (2005); and Excavating Egypt: Great Discoveries from the Petrie Museum of Egyptian Archaeology, University College, London (2005), and Ancient Nubia: African Kingdoms on the Nile (2012).